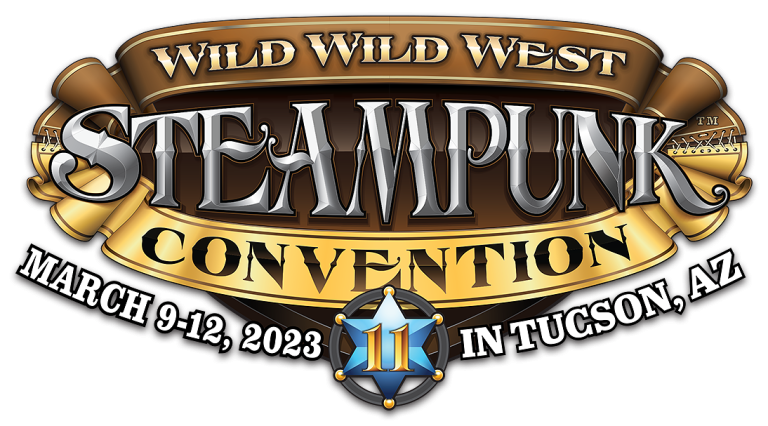 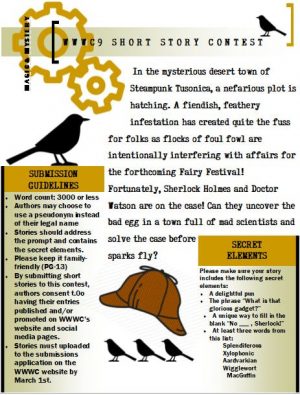 Please consider previewing our short story collection prior to voting at High Chaparral during WWWC.

These are the entries for our Short Story contest as hosted by our wonderful Director of Charity and Immersion, Christin Pike!

While on a train back from Cottingley, my friend Sherlock Holmes and I are in a private compartment while I listen contentedly to the slick-slick sound of our british rails as I gaze out the closed window to enjoy the green countryside and avoid the coal grains that pelt the window panes of our traincar. The train door to the outside is whistling along its seam from years of use. And Sherlock is reading a paper with his feet on the coach sofa, his countenance, calm, no reaction to the whistling from his hyper-sensitive ears. Dear Reader, It was the finish of an adventure started 2 weeks, 2 days, and 2 hours ago

On that day, it was usually a 4 postal-delivery day, 2 before lunch and 2 before teatime, with letters to Holmes begging his assistance but today and 2 days prior, no lamentations arrived and Holmes was showing Stagnation. Stagnation meant Holmes might seek his more infernal vices. A postman-sounding rap resonated our door. With relief I opened it to an empty hall, and with surprise a small welp cleared his throat and I smiled widely down to him. “Telegram”, he said with small authority, “immediate response requested.” ‘Immediate response’ meant that the sender was waiting with another telegrapher far away. A gamble with Holmes and I, since our lives can take on a whirlwind pace. And expensive to hold a telegraphers attention for so long. Holmes jolted from the settee, as if by strings, to a standing position. His shoes were on, fireman style, having sat for hours by the settee unappreciated but positioned for action. With our hats chosen, mine getting a fresh spritz of vodka to freshen its scent and coats buttoned we followed the little telegraph assistant to his station. To insure promptness, Holmes and I both tipped the waif.

At the station, the telegrapher said “ Hold please, review the caller’s message” He thrust a carrier size envelope and furiously clicked away. We started to turn to find a table to sit, in the luxuriously appointed station “Fill out the response”, the telegrapher interrupted our turn with another sheet thrust across the counter and a semi-spherical segmented container on a 3 legged stand that stayed perfectly level as it was haphazardly plunked onto the counter. “What is that glorious gadget?”, I inquired of the nickel plated hemisphere now protruding a feather quill. The little assistant quickly grabbed it off the counter and led us to an empty round table with eagle claw feet, “‘Tis a ship’s inkwell, sir, see? It won’t spill in any storm.” And with a flourish, he folded the segmented lid away to reveal a gimbaled inkwell, perfectly unspilt. “An aardvarkian armour”, blurted I. “Pangolinian”, corrected Holmes, “both anteaters though” “Well”, I blushed, “my Afghanistan post was a long way from Africa.”

Holmes smiled tightly and eyed me “You are unquestionably quite capable in biology which serves us well in investigations but your zoology is lacking Watson.” “I know enough”, I sniffed. “In that one tale of investigation, you had a snake return back, at a whistle, like a dog! Snakes don’t have ears; they feel only low frequency sound resonated by their body length. The villain stamped the floor to trigger the snake’s return for milk, as I told you when I smelled cream and urine.” “Smells don’t play well in a written story, Holmes. A fakir’s flute was more metaphorical and visual.”, I countered. He snorted down his hawk’s nose and opened the large envelope. Inside was another envelope of smaller size but still ample enough to hold sheets of paper. “America”, mumbled Holmes. He had obviously memorized every post stamp for every country. “Arizona”, he said leaning towards me with a meaningful glance. How he divined that one, I shan’t say nor will I ask. As I scooted forward, “Lots of postage to carry that across the pond.” “A 2 weeks journey, Watson, the telegraph will carry my response at the speed of voltage.” explained my friend. “Yes, like neurons in a brain, allowing our countries and their leaders perfect communication. No more misunderstandings to precipitate wars or embargos”. I was waxing metaphoric to make up for my aardvark-flop.

“Hmmmm”, sighed Holmes handing me a flyer while he tracked across every detail of a letter. The flyer was an alert about the phoenix bird who had come into breeding during the hot desert spring of Tusonica. Like the legend, the bird lays reddish eggs but unlike the poetic phoenix it kills dragonflies and fairies to prepare them for the egg’s hatching. And a well-detailed printed photograph of one girl pictured in shock looking at a nest of crushed bugs and fairies , surrounding a red egg. Another girl clearly too frightened to approach, looked on from a distance behind the first girl. A black and white photo but printed with color for the egg and the turquoise hair of the dead fairies. “Oh, no, the wee fae”, said I. For they are luck personified and gamblers love all that are lucky. “Oh spare me Watson”, Holmes said without looking away from the letter “There are forces that bind us, Holmes, as sure as that telegraph connects the world.” Ah Dear Reader, I’ve seen the miraculous on the battlefields and every soldier gambles whether with his comrades or with his very life. With a sniff, also in his repertoire of retorts, he told me of the owner and organizer of the Fairy Festival in Tusonica, Arizona faced with the offending flyers. ”Ms. Cassandra Sparrold has appealed for our service since we have great experience with fairies….” Holmes paused. “Great experience with the Fae?” “Oh, sorry Holmes ,that might be my doing. In the Case of the Spring Urchins, I gave a supernatural lean to your deductions, especially the cry of the dark fairies during the evil urchins’ sacrificial rites.” Holmes winced, “That was the blood droplets hitting strings triggering a xylophonic chime below the stump alter, hardly supernatural!”

“Well, metaphor is the writer’s left hand. Not sure who said that.”, I expounded. Holmes sighed, “You did Watson. How am I to speak logic to this Arizonite?, Arizonian? Auzy?” “Frightfully sorry Holmes but I want all of the globe to know your acumen.” With another snorted retort, he scribbled furiously on the form and took intense advantage of the unspill-ability of the inkwell. Passing it to the telegrapher, he turned to leave. “There may be a reply, sir”, said the telegrapher, startling his assistant from his sandwich. “I marked it no reply necessary”, spat Holmes. Obviously the telegrapher was a slow reader.

We fumed back to the Baker Street flat until I couldn’t stand the suspense. “What was your message Holmes?”, I begged. “You’ll see ‘wordsworth’, you’ll see.” I knew it was a waste of time, for my friend likes to surprise me but I had no idea that that surprise was 2 weeks away. After 2 weeks and 2 hours, we had had some mildly interesting adventures, but Holmes was always many steps ahead and quickly solved them. The door knocked like our regular postman and I remembered our Fairy Case as Holmes pulled from his smoking jacket the very flyer sent to us 2 weeks and 2 hours previous. A box from America was sat by Holmes and his balloon chair, with its cowl of silence, he was wont to say. Quick with a blade, Holmes had it open and with me in my leather, upholstered, wing chair and both of us next to the fireplace, he casually one-by-one dropped each new flyer from the box into the fire I was aghast. “Holmes what are you doing?!?” He still had the original flyer in his free hand and seemed lost in thought as he mechanically dropped different sizes, different colors, different fonts into the fire to be consumed. He whispered, “I’m divining the solution through magic. The answer awaits us on the train. Get packed Watson for a 2 day round train ride to Cottingley….”

And so Dear Reader, with Holmes magically producing 2 train tickets, we journeyed and spoke with a young lady named Elsie Wright and her mother. Elsie was pleasant but seemed confused when Holmes thanked her, excused us and brought us back to a train, 2 weeks, 2 hours and 1 day from the beginning of this case.

Dear Reader, my friend is driven, dogged, determined when on a case but Holmes has spent this train trip with his feet up, actually relaxed. His travel hat even now is tipped down to his long nose, the newspaper is resting under his folded arms, his feet are crossed comfortably on the train couch, the picture of a tourist on holiday. Fed up, I said, “Alright Holmes, give it up, why are we on this bloody train?”

“MacGuffin”, he said. “MacGuffin?”, I said. “MacGuffin!” He said, “This whole train is a MacGuffin.” “I wanted you to meet the Cottingley Fairy girl. Did you see her when we spoke of the validity of the photos. Surely you’ve seen the Cottingley Fairy pictures?” sitting up and pointing at me firmly. “Yes, yes, all of the world has seen the photos. The wee fae inspire us all”, I conceded. “Well, my dear Watson, Elsie Wright agreed to meet with us a week ago!”, he clapped his hands. “I convinced her I was a rising magical performer and would pay her for her photo tricks. The fact that she agreed to meet is telling? Yes? And her demeanor tells us she faked the photos. I wanted you to know that there are no fairies, not in Cottingley, not in Tusonica. I knew the flyer was a fake, it had the same style as the Cottingley photos. Did you see the watercolors in her house? Ms. Elsie Wright is quite an artist but not a great liar.” I cut him off, “Holmes! You spoke with Elsie Wright a week ago? Before you received the box from Cassandra Sparrold?” “Yes, the box of flyers would reveal the perpetrator, this trip was to show you the wee folk are a contrivance. A con! I needed the box of flyers to match the paper of the phoenix flyer to other flyers collected from the town and so tasked Cassandra with gathering one of every flyer available to be shipped to our flat. The perpetrator would have used the same flyer print-house for their fake flyers as well as the true flyer to provide their profit. And when I found my matching flyer I palmed it under the original flyer while burning all the flyers in the box…..Magic! The phoenix bird eggs were going to expel the fae from the whole area. They contrived one legend to destroy the other. And their true flyer was the Gnome Convention in Colorado for the same weekend. Jamie Price, owner of the Convention ,even put his name and how to wire for tickets, a specific move to collect the remote former Fairy Festival-goers. And when we’re back in London, a revealing telegram will likely not help our Cassandra since the true believers will still vacate and possibly go to the Gnome Convention instead. Twas all a Fairy Con, Watson.” “g-NO-me Con, Sherlock”, I corrected. “Well, what do you expect from CON-ventions?”, wryly spoke my friend, Sherlock Holmes.